I was working in Santa Clara today and realized that the Washington High Eagles boys basketball team would be playing in San Jose tonight against Santa Teresa at 7 PM in a CIF State Playoff game.  Since I was in the area (sort of, it was estimated to be some 19 miles + 30 minutes away), I decided to head over to the game.   Some thoughts...... 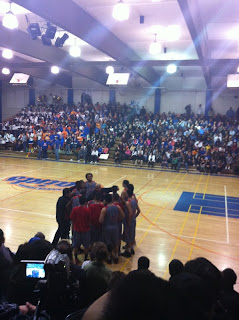 The drive to Santa Teresa High School took about 40 minutes as I ran into rush hour traffic.  As I pulled into the school's parking lot, I was surprised to see a lot of cars already there.  As I walked to the gym, I saw a short line out the door.  It was then I knew I would be walking into hostile territory.

The environment was crazy.  Both sides of the gym were packed with fans (the majority of them Santa Teresa).  There was a student cheering section as well as cheerleaders.   The entire gym was loud, especially since Santa Teresa played well and eventually beat Washington 70-60.   I don't know if Santa Teresa is like this every game they play, but it was definitely a boost to their team and hostile to the visiting Washington team.

The Washington team wasn't bad though.  While I am not a graduate of Washington, I had officiated one of their games during this past season and knew the coach personally.  After winning the San Francisco AAA championship against Mission last week (first championship since 1982), I was curious how Washington would do in the bright lights of the CIF State Playoffs.

Some of the things I had noticed during the AAA championship game came to light against Santa Teresa.  Washington and Mission both thrive on up tempo games as evidenced by the 75-72 final score in the championship.   I thought it was interesting that Washington didn't hit a lot of outside jumpers.  Most of their shots were put backs or layups.

This proved to be a key against Santa Teresa.  With Santa Teresa hitting their shots, Washington was forced to play half court and had trouble generating offense.  They went through a cold streak from halfway through the first quarter into the second quarter and allowed Santa Teresa to pull away to a 20 point lead.  Washington never really challenged after that.

While it was a tough night for Washington, they should keep their heads high for making a great effort.  Good luck to Santa Teresa as they travel to Sacramento for their next game.
Posted by DCL at 12:11 AM